There are a few things that instantly spring to the minds of punters across the country when thoroughbred racing on the west coast of Australia is mentioned.

The popular mantra of “Pike in the last”, the cerise and white racing colours of leviathan owner-breeders Bob and Sandra Peters and the man with the golden tonsils, Darren McAullay, are examples synonymous with the state and easily associated by racing followers nation-wide.

McAullay, renowned as the voice of WA racing, has been a staple of the local industry since the early 1980s and will celebrate 40 years of broadcasting on December 5.

Born on January 21, 1963 to a jockey-turned-PMG linesman father and a nurse mother, McAullay grew up in Kalgoorlie and was always destined for a career behind a microphone in the sport he had developed a passion and borderline-obsession for at an early age. 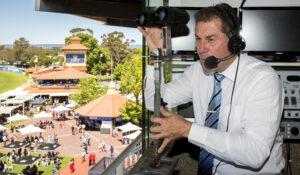 “When I was 16 I called my first race on radio for 6KG,” McAullay said.

“The club wanted a junior caller and I’d been working for the club as a valet in the jockeys’ room, which I did from about 10 to 14, and I was a flag boy for false starts when I was about eight.

“It was probably about the middle of the year, and I was given the open sprint race to call, which is the only race they broadcasted into Perth on 6PR.

“I’d been practicing on a little box down by the old grandstand that’s no longer there but that’s how it all started.”

The next two years would see the then-16-year-old begin to hone his skills whilst developing a strong work ethic that would become the cornerstone of his success in the years to come.

“I was still working as a postie but we did everything in those days,” he said.

“I was a postie in the mornings, I would be writing at the Kalgoorlie Miner during the day, then at the ABC some evenings presenting on the new TV station at the time, VEW8, which is now GWN.

“I’d do shifts at a bar, DeBernales was called the Victoria Tavern back then, and I’d do a shift at 6KG from nine until 12 learning to be a DJ.

“Anything you could do, we did.

Whilst working at the ABC reading the sports news three times a week, McAullay developed a friendship with the DJ – Bryan Dennis – who would later become well-known Australian musical comedian Kevin “Bloody” Wilson.

Dennis encouraged him to apply for a newly advertised position of Junior Sports Broadcaster at the ABC, which he did, and McAullay made it to the final cut of applicants after interviews with colourful broadcaster George Grljusich.

The job ended up going to a young Michael McCann, however, another opportunity soon came knocking.

“Eventually I got a call from Rick Rodgers, who was the head of sport at 6PR,” McAullay said.

“He introduced himself on the telephone and was very complimentary and courteous.

“I think there was some rumblings with Trevor Jenkins at the time, who was the Senior Thoroughbred Caller.

“I think they were at loggerheads with what Trevor wanted and what they were prepared to pay for him.

“In some form of way, I was probably used as a bit of pawn in the game.”

McAullay travelled to Perth for an official interview with 6PR and was also asked to attend a race meeting with Jenkins at Belmont Park.

Much to his shock, Jenkins had something in store for him.

“He said to me, ‘seeing as you’re going to start here, you might as well call one’,” McAullay said.

“He gave me a 2400-metre race and I’ll never forget it, Boxing Day Boy won it and its colours were pink with white spots and a white cap.

“I called the race and probably called it better than I thought I was capable of, and they were happy.

“Rick Rogers said to me, ‘listen, we want you to come to Perth and take on this Junior Broadcaster job.

“I signed on the 5th of December and Stuey Shenton had just moved to Kalgoorlie at the time, but you had Trevor Jenkins there, John Hunt was calling the trots, Stuart Lowe was calling the dogs and I was coming in picking up the pieces.”

McAullay quickly rose through the ranks to become Senior Harness Caller, where he carved out his craft throughout the 1980s, whilst later working on the ground at metropolitan thoroughbred meetings and flying to Kalgoorlie to call during the respective seasons.

He particularly enjoyed the experiences presenting at Ascot and Belmont Park while Shenton was Senior Thoroughbred Caller.

“When Stuey was calling, I’d be the bloke in the bookie’s ring doing all the betting fluctuations,” McAullay said.

“It was a dream and such theatre and drama.

“We were the first in Australia to actually broadcast off course the bookies’ prices and it was the best thing I’ve ever done.

“I had a broadcasting spot down there, then I’d go into the mounting yard and do all of the interviews post-race for 6PR.

“The day that Rocket Racer collapsed it was nearly on me.

“As he was collapsing, he bumped into my shoulder, and you can see it on the vision.”

The unfortunate demise of Shenton’s calling career in the early 1990s later presented an opportunity for McAullay and he was promoted as his heir apparent, calling his first Perth Cup in 1992 and calling each of the 28 carnivals since.

Fast forward eight years and McAullay was presented with a monumental offer from Australian broadcasting legend and recent Hall of Fame inductee, John Tapp, whom he had met and struck up a friendship with at an Ansett Race Caller’s Cup meeting at Coffs Harbour years earlier.

“It was 1998 and I had just got established, had just been married and just had our first baby,” McAullay said.

“John rang me one day and said, ‘I want to tell you something, but you’ve got to keep it confidential … I’m going to pull the pin.

“’I’m retiring from calling and I’m going into another role’.

“He was only 58 and it caught me by surprise, but then he said, ‘I wanted to see if you’re interested in moving over to Sydney and succeeding me?’.

“It blew me away and I went home and had a lot to think about.”

McAullay’s wife at the time was hesitant about moving across the country with a newborn, however, discussions improved after meeting with Sky Racing representatives.

McAullay recalls an agreement being all but confirmed before things were turned on its head at the 11th hour.

“I remember being at the restaurant in Applecross and I’d basically signed the deal,” McAullay said.

“Then my ex-wife said she was going to the toilet and when she came back, she said, ‘I’m not going’.

“It was the end of that, but they came again a couple weeks later and said they’d get me work at Channel 9 and made some other offers.

“It was terrific and very flattering, but at the end of the day it just wasn’t going to work if I went over there.

“Ultimately the marriage didn’t work out after 20 years, but we had two kids and I have no regrets.”

Sydney’s loss was WA racing’s gain as McAullay remained in Perth and continued to forge a prosperous career.

Widely regarded as an elite preparer, he says it has been paramount to his longevity in broadcasting.

“My preparation isn’t as great today, but when I started out, I prepared beyond belief,” McAullay said.

“I knew every horse and every pedigree in the race book and that opens doors into doing other things.

“You start doing MC work, auctioneering, functions, running different associations and the like.”

McAullay continues his thoughts on how he perfected his art through the early stages of his career and has been able to stay at the top of his game.

“Learning and listening to my peers,” he said.

“Learning and taking the best of every bloke I ever worked with or in the company of, whether that be Stuart Shenton, John Hunt, John Tapp, Greg Miles or John Russell.

“I sat there, and I loved listening to them and I loved their stories and I watched how they worked their craft.

“They all had their strengths and differences, but I just admired all of those blokes for what they did.

“There’d be others as well along the way, but I was a sponge and applied the discipline to go the extra yard over the years.”

Having been at the forefront of virtually every big occasion on metropolitan thoroughbred racetracks in WA over the past 20 years, McAullay has been thrust with the responsibility of depicting each moment to a wide-spanning audience.

Off-the-cuff one-liners in the heat of the moment have turned certain races into classics, such as Elite Belle’s 2014 Railway Stakes victory when McAullay declared, ‘she’ll have to pogo stick over the field to win from there’ as the field approached the turn before following up with, ‘getting through is Elite Belle … strike me pink, he threaded the eye of the needle!’.

Delicacy’s famous 2016 Perth Cup win when McAullay proclaimed, ‘sublime, brilliant, greatness in the cup’ after the great mare created a new weight-carrying record in the race was also among his most memorable calls in recent times, however, he says it’s hard to pick a favourite.

“I’ve always said that the Beaux Art-King Of Saxony Derby was a great race to call,” McAullay said.

“Scenic Shot and Daka’s Gem’s dead heat in a CB Cox Stakes is one that people never really remember but it’s one of my favourites.

“It was just one of those days where you say, ‘dead heat’ and you instinctively know it is.

“The Perth Cup that Cat’s Fun won where there were multiple falls early on was the hardest race I’ve ever had to call.

“Horses were coming back in the opposite direction, and I was thinking, ‘oh no, how am I going to frame this and word this?’.

“Luckily from an act in God they popped off into the shute at the 1500 and off the course proper and the race continued on.

“I remember I came home that night, and I was completely and utterly mentally stuffed.” 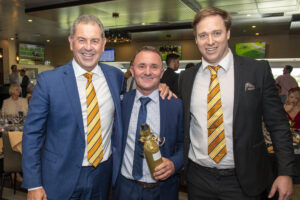 Currently 58, the same age that immortal pair Tapp and legendary Hall of Fame caller Greg Miles were when they hung up the binoculars, McAullay knows he’s closer to the end than the beginning.

However, the man with the golden tonsils still has the zest to continue.

“I’ll probably get a bit more selective towards the end if I can, because the travel can be a killer,” McAullay said.

“I’d hate to think how many kilometres I’ve flown and driven over the years, but it’s always been my passion from when I was a little kid at primary school.

“I’d just be sitting there drawing horses and creating racing colours, so much so that my grade three teacher spoke to my Mum and said, ‘he’s got to develop another interest’.

“But I still feel good, and I’ve still got the energy all these years later.”