At the age of 99, Michele Gangemi strolls into the Ascot mounting yard with all the assurance of a man in his prime.

The oldest member of Perth Racing is offered a seat but chooses to stand, making the slim cane in his hands seem more a style accessory than a walking stick.

The Pinnacles race carnival is the latest of many he has enjoyed for more than half a century.

“I used to come to the races every Saturday but now age has caught up with me and I come once a month,” Michele said.

“I enjoy meeting people and when I come to the races, I see people I used to do business with and talk to them.”

Michele, often called Mick, was never in the business of racing. He worked for the Peters dairy in Perth for 44 years and yet he started a racing dynasty by sparking the interest of his children and grandchildren, including training duo Michael and Chris Gangemi and Perth Racing former vice chair Peter Gangemi. 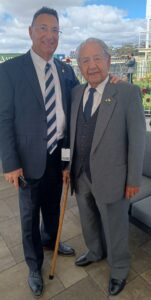 It all began with a visit by Italian soccer stars AS Roma to Perth in the 1960s, while Mick was the local Azzurri club president.

He helped launch a racing tradition when the players were hosted at an Ascot meeting and the Roma Cup was created in their honour.

Over the years, the Roma Cup became not only the highlight of Perth Racing’s annual Italian Raceday but also a sporting ambition for the family who helped to create it.

In 2017, the Gangemis lifted the trophy when the legendary Rock Magic won the $250,000 Group Three event. The following year, the brothers scored a Roma Cup trifecta with Rock Magic, Battle Hero and Durrendal.

It’s an unusual leap from an Italian soccer team to West Australian horse racing but Mick said his link to racing was cemented in 1966 when he backed jockey JJ Miller and Galilee to win both the Melbourne Cup and Caulfield Cup.

“The double came off and I bought a new car for my wife,” said Mick.

Whether it was the lure of the big win, the horses or the colour and atmosphere, racing had the Gangemi family hooked and various members went on to forge careers in the sport.

“I tried to talk them out of it but I never had a chance,” Mick laughs.